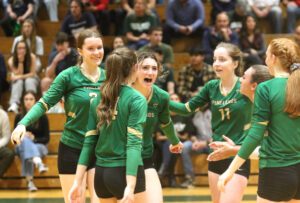 At its Nov. 21 meeting the Pinelands Regional Board of Education voted unanimously to allow home-schooled students to “try out for, and participate in, district sponsored after school co-curricular activities as well as programs of athletic competition, as defined in Board Policy 2431 Athletic Competition.”

Mr. (board member Raymond) Bartlett had asked us to revisit the fact that our home-schooled students do not get to participate in activities and/or sports, and we agreed that that needed to be researched,” said Superintendent of Schools Melissa McCooley. “Miss (assistant superintendent Gina) Frasca and I did look into that with Miss (director of student personnel services Karen) Kenny’s help and Mr. (athletics supervisor/supervisor of health and physical education Will) Sundermann, and we did see that other school districts in Ocean County do participate, you know, let their home-schooled students do that. I see no reason why not to open more opportunities for students; even those who are home-schooled may participate in our activities and may want to be part of our school family. So I think it’s a win-win.

You’ll see on the agenda tonight there are two policies for revision, and that will allow home-schooled students to participate in clubs, activities and sports. The caveat to that is they have to provide their own transportation here at the end of the day, but they’re welcome to take our buses home, our late buses, and they will have to participate in the random drug testing that our students have to, so they still have to follow those regulations. So if their name is randomly called, they (parents) would have to get their child in to participate in that.

But other than that, you know, we welcome the students that want to be part of this. So those are the revisions that you’ll see on the agenda tonight. So once those are passed, home-schooled students can now participate.”

The board’s unanimous vote was a dramatic reversal of a decision made by the then-board of education in 2017 when a home-schooled student was denied the opportunity to participate in the district’s athletic programs.

At that time Interim Superintendent of Schools Maryann Banks informed the board that would be impossible because the district would have to change its policy to accommodate the student. That was despite the fact that the New Jersey State Interscholastic Athletic Association had allowed such students to participate in interscholastic athletics since 2011. The Pinelands policy in 2017 seemed based on the NJSIAA’s older rules.

We are aware that the NJSIAA changed its policy to allow districts to include home-school students based upon certain criteria,” said Banks when challenged at a meeting. “Presently the board’s policy regarding home-schooled students says specifically, ‘When children are educated at home and are not enrolled in a school, the school district is not required to provide any of the entitlements or privileges of pupils enrolled in the school district unless specifically provided in the federal special education laws.’”

Then-board president Susan Ernst went on to reiterate the Pinelands policy had just been revised in 2016.

It was then brought up at that 2017 meeting that the board had effusively praised the taxpayers of the district after they passed three referendum questions totaling $53.6 million the previous January. One of the questions had asked voters to approve the spending of $1,943,750 to upgrade the district’s athletic facilities. The state of New Jersey was chipping in 19% of that total, leaving local taxpayers responsible for $1,568,750. It was also brought up that the board had stressed in pre-referendum forums that the athletic facilities, especially the football field, are used not only by Pinelands students, but by members of the community as well.

The parents of the student in question were taxpayers and members of the community. But that argument didn’t sway the board into reconsidering the policy. Indeed, Ernst said the policy would not change.

Banks also brushed away objections to the policy at that time, saying it didn’t affect many children, considering there were only three home-schooled students residing in the district, with “home-schooled” meaning their parents have voluntarily withdrawn them from the district, not to be confused with students being taught at home by district teachers because they are unable to attend school due to physical or other reasons.

She added that Pinelands was not unique in not allowing home-schooled students to participate in athletics, saying many districts in New Jersey had similar policies.

The Lenape Regional School District was one of those. Some 20 fellow football players had showed up at a Lenape board meeting the previous fall to protest the decision of that board not to allow a 14-year-old home-schooler to join the high school’s football team.

My tax bill says I pay $2,092 in school taxes,” The Marlton Sun quoted Marrii Cunard, the student’s mother, as saying. “Since our money funds your schools, my son and other home-schoolers really should have access to athletics and activities because they are students, too.”

But Lenape Superintendent Carol Birnbohm defended that policy, according to the Sun: This policy is not intended to be, nor is it discriminatory in any fashion; in fact it levels the playing field by ensuring that all participants in curricular, extracurricular and athletics programs meet the same rigorous requirements for participation in our programs.”

Some members of the 2017 Pinelands board expressed those same concerns. The new revised Pinelands policies address those concerns.

Perhaps, though, allowing home-schooled students to participate in extracurricular and athletic activities might actually bring those kids back into the classroom. After all, they would make new friends, have new experiences and might just beg their parents to allow them to return to school. Isolation was a huge concern when schools were closed due to the COVID-19 pandemic; isn’t not allowing children to participate in activities a form of isolation?

Exactly,” said McCooley when she was told that later in the week.

Pinelands Will Now Allow Home-Schoolers to Participate in Sports, Other Activities